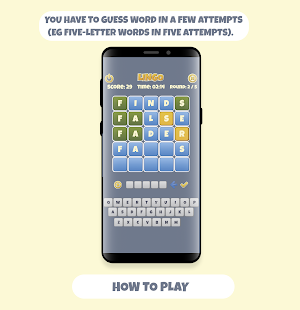 Lingo! The word game APK MOD Software for Android – APK Download Lingo is an addictive word game. The game is inspired by a popular game show in which you guess the words. Your task is to guess five-letter words (default game mode). Playing Lingo, you can feel like in gsn game show.

❓ How to play
The rules of the game in each of them are similar – your task is to guess words in several attempts.
There are a few game modes available in Lingo:
◾ 4×4, 5×5 and 6×6 – the game modes are similar. You have to guess the words within a certain time. The differences between them are described below:
– four-letter words in four attempts,
– five-letter words in five tries (default mode, like in gsn game show) and
– six-letter words in six tries.
◾ 5 Rounds – you must guess the five-letter word. The main difference is the limited time game and plays only for five rounds (as in the title).
◾ Time Trial – the game lasts 5 minutes. Your goal is to guess as many words as possible in a given time.
◾ No Time Limit – there are no time limits here. The game is over if you fail to guess the word in five tries. In this mode you guess five letter words.

Each letter of the entered word is highlighted on screen in a specific color (as in well known game show).

If you get stuck on a guessed word – you can use a hint. By default, when starting the game you have 3 hints. You can buy hints in the application. In addition, if possible, you can watch the ad. After watching the advertisement, you will receive 3 hints and you can continue playing.

Have fun! and guess as many words as you can. The best score is stored on global Leaderboard!