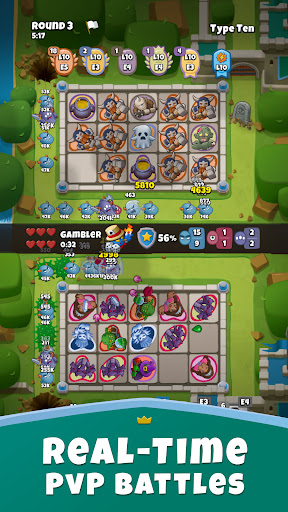 Clash with epic bosses and their minions in defense of your kingdom. Collect powerful heroes and special abilities to build the ultimate battle deck and claim victory as you compete with players from around the world. With victory comes new stadiums as you climb the ranks and earn more chests, gold and trophies!

NEXT HERO – It’s no longer just a random roll of the dice, with the Next Hero button you can plan your merge and spawn strategy.

MASTER DECK STRATEGY – Choose which unit will be your Primary Hero and supporting cast as you head into battle. Decide which Ability card will best support your deck for maximum damage.

ABILITY CARDS – Complement the heroes in your deck with the perfect ability: Enhanced Attack Speed, Reroll, Energy Boost, Meteor Shower, Enhanced Merge, Instakill – these are just a few of the ability cards to collect and use!

Rush into battle to defend your castle, or join forces in co-op to fight against wave after wave of enemies. Remember, merge your heroes wisely because the best strategy wins!